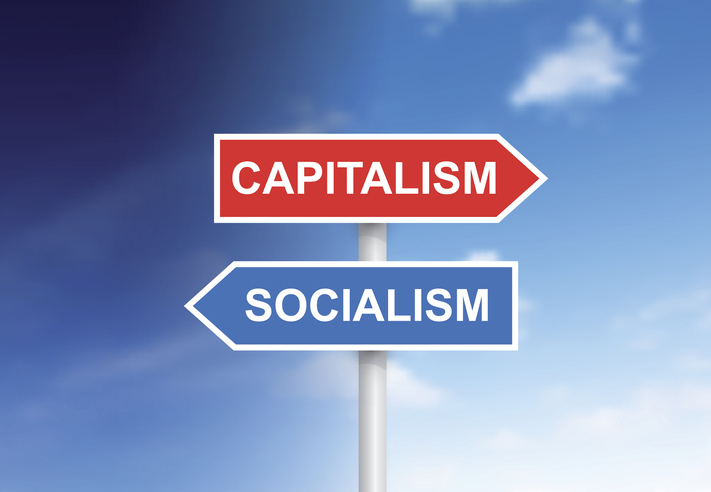 Socialism and capitalism are two different ways of achieving a goal in politics. The main goal—hopefully everyone can agree—is to achieve the common good. We all want people to have their needs met, to have meaningful work to do, and to live in thriving families, neighborhoods, and communities. The conflicts between those who favor socialistic policies and those who favor capitalistic policies revolve around how the common good can best be achieved.

Capitalism relies on markets for most transactions. It encourages people to invest in business endeavors, giving entrepreneurs funding in exchange for a share in the profits. In a capitalistic system, the government’s role is primarily to ensure that markets are fair, to provide a healthy infrastructure, and to protect individual property rights. Socialism, by contrast, mainly relies on the government itself to provide the services that people need at various points in life. In socialism, people tend to pay a higher tax rate so that the government can provide the social services everyone needs. In socialistic countries, things like health care, childcare, university fees, and retirement savings are funded and administered by the government.

People often ask whether Christianity favors one economic arrangement over another. The answer is complicated. On the one hand, socialistic governments seem to be the most generous because the poorest citizens receive benefits free of charge. We know that caring for the poor is clearly a Christian desire. The early church shared all things in common, and Christ himself told us to feed and clothe “the least of these” (Acts 2:45; Matthew 25:45). However, capitalism seems to have points in its favor as well. For instance, Christ said that the “laborer deserves his wages” (Luke 10:7). Paul had a general rule for the able-bodied in the churches, “If anyone is not willing to work, let him not eat” (2 Thessalonians 3:10). These statements closely tie benefits (income and food) to work. How can we put all these pieces together?

First, we should just be honest—the Bible does not endorse any specific economic system wholesale. One reason for this is that every system, no matter how well constructed, will always be implemented by sinful human beings. Depravity is the built-in problem that every economic system has to navigate. Perfect justice will never be achieved on this side of eternity. Although we know the end goal is the common good, God left it to us to work out the best means to get there, guided by biblical principles and concerns. Here are some questions Christians should be asking:

Does this public policy make it easier for individuals, families, and local communities to flourish? Does this policy seek the common good of all?

Christ’s commands are to love God wholeheartedly and to “love your neighbor as yourself” (Matthew 22:39). This means looking not only after our own good but trying to discern what is best for everyone. This requires public-spiritedness and a love for neighbor that looks beyond narrow self-interest. In the long term, if a proposal damages the integrity of families or harms the flourishing of communities, then it affects us all.

Does this public policy respect the dignity of work? Does it maintain the connection between work and property?

Work is more than just a way of being economically productive or earning a paycheck. Work is a calling, a way to serve God. Work provides purposefulness to our life and a healthy pride in doing something well, contributing to our city, and providing for our family. Therefore, any policy that demoralizes people or makes them give up doing meaningful work is inherently damaging to them.

We know that we want the poor to reach financial stability and for the sick to be healthy, but it’s hard to discern how best to achieve this. Sometimes the most we can do through a government policy is prevent making the situation worse. Many well-meaning social programs have ended up hurting the people they were intended to help, locking people into permanent poverty.

In our own country, capitalism has been the economic system that has created the most prosperity for the most people. But the reason capitalism has worked as a way of providing for the common good in America is not because it is a superior theory. It has worked because Christian faith gave Americans certain attitudes—what Alexis de Tocqueville called habits of the heart—such as generosity. When a capitalistic system is paired with generous hearts, it can provide general prosperity and create space for charities to help those in need.

When the early church shared all things in common, as we read in the book of Acts, they did not need a government agency to help them divvy things up. They appointed officers and organized it themselves. Similarly, when Americans have seen needs, they typically haven’t waited around for a government bureaucrat to show up and solve the problem. Instead, families and churches and nonprofits have stepped in to provide home-cooked meals, health care, education, and friendship to those in need.

But is this still true of us? Part of the reason why so many people in America have begun clamoring for socialism is because we’ve become less generous and more isolated as a country. This increases the attractiveness of welfare programs administered by the government. Ultimately, the challenge that lies before us is a moral habit before it becomes a public policy. We have to decide as individuals and as a nation whether generosity will be a habit of the heart that leads us to give creatively and generously to those in need around us. Will we love our neighbors? Or will the government do it for us?