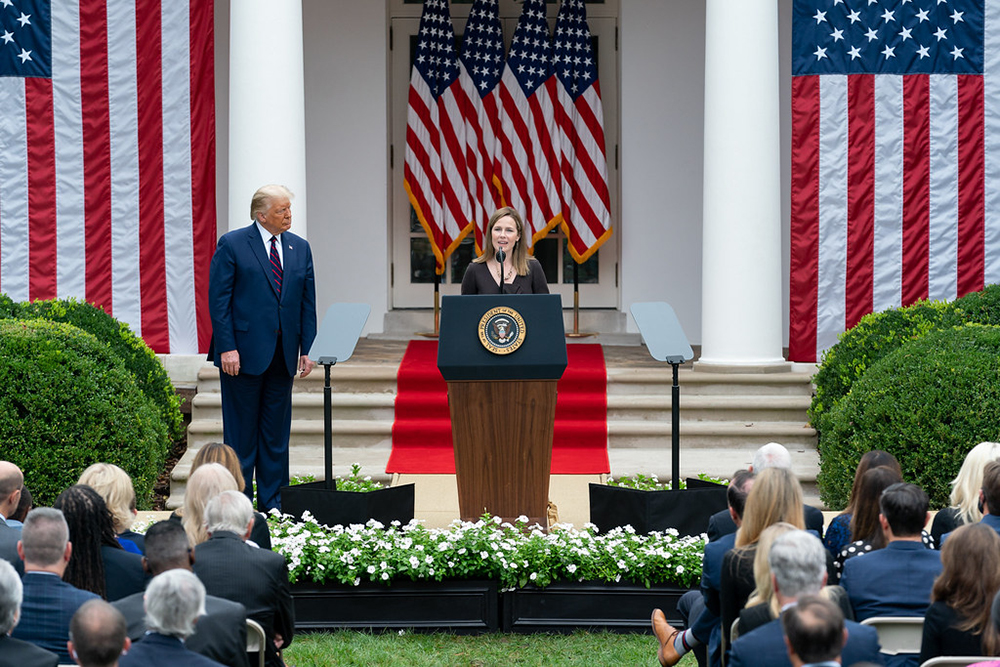 President Donald Trump has nominated Appellate Judge Amy Coney Barrett to the Supreme Court of the United States. Over the next several weeks, every single aspect of Judge Barrett’s life—including her faith—will be questioned ruthlessly and skeptically by Congress, the media, and the general public. Barrett has been through this before. During Judge Barrett’s confirmation hearing for her seat on the Seventh Circuit in 2017, Senator Diane Feinstein tried to raise doubts about whether Barrett’s Catholicism would be a hindrance to her service in the nation’s federal court system. Feinstein said ominously, “The dogma lives loudly within you.” Of course, what a liberal like Feinstein meant as a damning accusation was actually what any committed Christian would count as the highest compliment.

The question has never been about whether Judge Barrett was qualified professionally to serve on the Court. Even the most progressive Senators and legal minds know Barrett is an exceptional candidate. She graduated from Notre Dame Law School, where she went on to teach as a professor for over 15 years. She published well-received articles in prestigious academic journals. She clerked for Justice Antonin Scalia. She has been recommended strongly by her own Notre Dame colleagues, a bipartisan group of law professors, and the American Bar Association. By every standard imaginable, Judge Barrett meets and surpasses the qualities we would expect of someone serving on our nation’s highest court.

The “problem” with Barrett for progressives is that she is exceptionally qualified and intelligent, and yet she seems to truly believe and live out the faith she professes. “The dogma lives loudly” within her because it’s undeniable to outsiders that her life is atypical. She is mother to seven children—two of whom are adopted. Radically cynical people have tried to cast aspersions on Barrett’s motives for adopting two children from Haiti, but to any sane person this was an act of loving benevolence to give a home to children who needed one. Barrett has not allowed worldly ambition to crowd out an equal ambition for a thriving family life that revolves around the church. It shows the sad depths to which America has fallen that such a commitment would be so rare and would seem so alien to legislators and pundits in our nation’s capitol.

Liberal accusations against Barrett claim her vibrant Christian faith means she can’t be unbiased when ruling on important cases, especially related to abortion and same-sex marriage. Of course, this is a strange double-standard. The progressive wing of the Court isn’t “unbiased” in their constitutional interpretation. Any person who refused to adjudicate when human life begins isn’t “unbiased”—they’re insane. No wise person worthy of national leadership can avoid basic questions like when a human life begins or what a marriage is. The progressive wing and the conservative wing both have to form a judgment about life and marriage, and it is a contest of judgments and ideas, not a matter of bias vs. no bias.

Senators like Diane Feinstein who question the faith commitments of judges are in effec applying a religious test. This has been explicitly forbidden since the American Founding. Article VI of the Constitution says, “no religious Test shall ever be required as a Qualification to any Office or public Trust under the United States.” Of course, the No Religious Test clause was simply meant to avoid the establishment of an official state church, as it was practiced in England in the 17th-18th centuries. At the time, religious tests were used to ensure Catholics could not serve in political positions in England, where Anglicanism was the state church. In America, the ban on religious tests prevented a state church from forming. It was never intended to make true religious faith a disqualifying factor from holding office. It was always viewed as a good thing, throughout the history of our country, to root one’s political service in the Christian faith. But the Founders did not want the federal government itself specifying a certain denomination as the only one acceptable for holding office.

The reason Feinstein worried—and many liberals still worry—about Barrett’s faith is because the progressive wing of American elites have established their own state church. It’s called Secularism. Secularism doesn’t mind what you do in your holy huddle on Sundays or what religion you profess, as long as it doesn’t interfere with the secular agenda on life, marriage, and gender. Believe however you want—but judge like a secularist. You have to endorse the legal regime of secular orthodoxy, or else you’re a threat to it.

Judge Barrett represents a threat because her conservative Catholicism dissents strongly from secularism. But Barrett’s Christianity teaches exactly what the broad consensus was at the founding—unborn human life is fully life and worthy of constitutional protection. Marriage is between a man and a woman. A man is a man and a woman is a woman by God’s good design. These are the positions marked out by our national traditions and assumed by the US Constitution itself. But these claims fly in the face of the sexual revolution and the radical autonomy so popular in our country now, who have sought to coopt our court system to impose their secular orthodoxy.

Of course, facing skepticism because of Christian faith isn’t too surprising. Jesus told us it would happen: “If the world hates you, know that it has hated me before it hated you. If you were of the world, the world would love you as its own; but because you are not of the world, but I chose you out of the world, therefore the world hates you” (John 15:18-19). Every person who truly follows Christ will, at some time or another, be hated by the world. When we walk by faith, we will inevitably become out of step with the culture around us. But we can take heart, even amidst skepticism and persecution. Christ is not calling us to go where he hasn’t already gone himself. In Christ we have the sure hope that “this light momentary affliction is preparing for us an eternal weight of glory beyond all comparison” (2 Corinthians 4:17). So let’s the dogma live loudly within us!