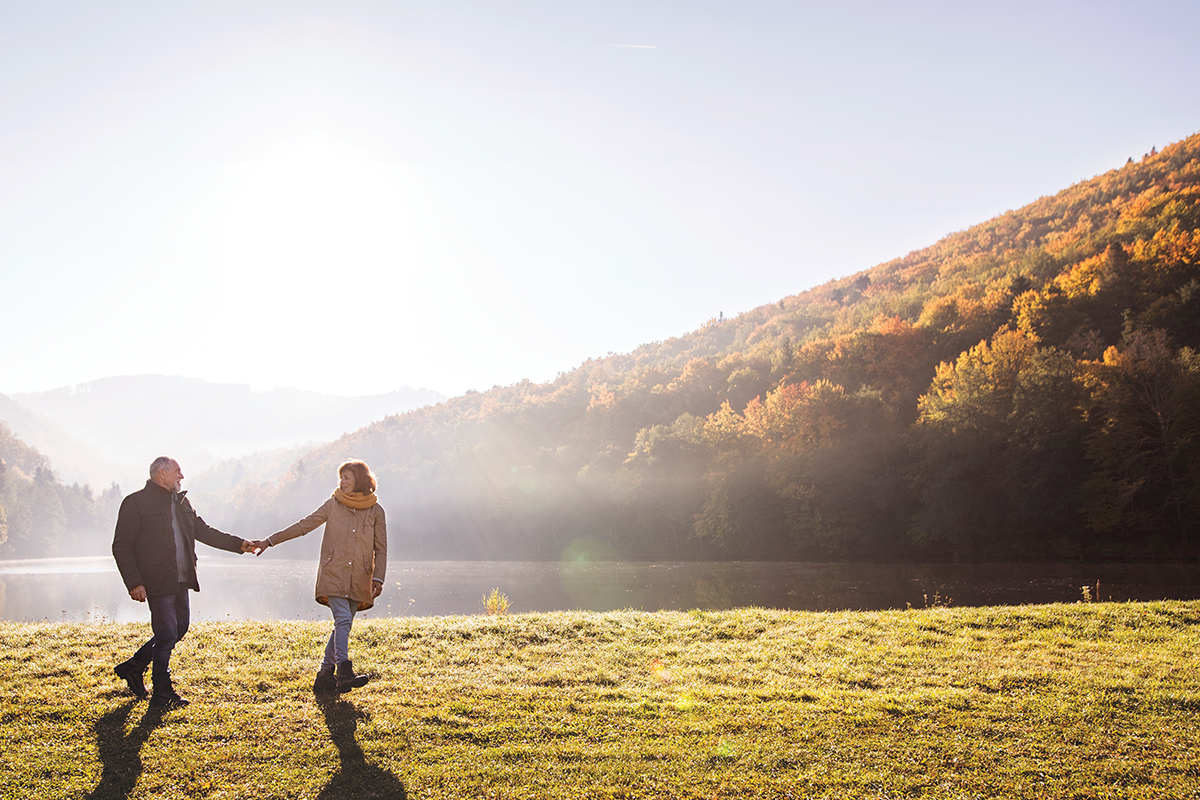 Moving from Loneliness to Companionship

Imagine you’ve been asked to participate in an experiment with a group of people. Everyone is instructed to toss a ball back and forth. What you don’t know is the rest of the group has been instructed never to let you have the ball. The others toss the ball back and forth between them, but it never comes your way. How do you feel? Isolated? Frustrated? A little angry? Eventually, you would likely retreat from participation.

Perhaps you’ve experienced something like this in your life. No matter how much you try, the ball never seems to be thrown to you. Your friend requests on social media go unanswered. Nobody calls or texts you back. How does that make you feel?

Loneliness in the Twenty-First Century

Loneliness is something everybody experiences but nobody wants to talk about. Never have we been more connected to one another and at the same time more disconnected from one another. You can hop on a plane in the morning and be halfway across the world by evening. You can instantly share your opinions with hundreds of people online. Yet feelings of loneliness and isolation have never been more acute. According to a recent survey by Cigna, more than three in five Americans report being lonely, and that number is on the rise. We are lacking social support and feeling left out.

Another study in the United Kingdom linked feelings of isolation with depression, cardiovascular disease, and even dementia. To make matters worse, in the wake of COVID-19, many mental health experts are concerned about the consequences of isolation on people’s psyches. The fact is, you and I were created by God for companionship, and loneliness separates us from the blessed life God has planned for us.

Loneliness in the Bible

In Scripture, there are five groups of people who are especially vulnerable to feelings of isolation and loneliness.

Those who are unmarried. Some people have been given the gift of singleness, but God’s plan for most people is to be joined together with another person in marriage. After God created Adam, He said, “It is not good for the man to be alone; I will make him a helper suitable for him” (Genesis 2:18). Was Adam really alone in the garden? No, he enjoyed fellowship with God like you and I will never experience until we get to heaven. But God said that wasn’t enough; Adam needed somebody else for companionship. That’s true for you and me as well.

Those who are married. Adam and Eve experienced loneliness when sin entered the picture and drove a wedge between the couple. When God held Adam accountable for his sin, what did Adam do? He blamed his wife: “The woman whom You gave to be with me, she gave me from the tree, and I ate” (3:12). It is possible to be married yet feel isolated from God and your mate.

Those who were once married. People who once enjoyed a marriage relationship but no longer have that relationship can feel lonely. When your mate dies, the links that joined you together—shared interests, tastes, beliefs, and jokes—are severed, and there is a void in your life. Even if you marry again, nobody is going to replace that first mate. Some people are no longer married because of divorce, which can also lead to intense loneliness. Divorce is not just the destruction of your relationship; it is a tearing apart of the individuals inside that relationship. In Matthew 19:6, Jesus said of marriage, “They are no longer two, but one flesh. What therefore God has joined together, let no man separate.”

Those who are mature. The longer we live, the more friends and family we end up losing to death, and that causes loneliness. Proverbs 16:31 says, “A gray head is a crown of glory; it is found in the way of righteousness.” We ought to celebrate the elderly, but in our youth-oriented culture, we tend to isolate them and make them feel obsolete.

Those who are ill. You’ve heard the saying “Misery loves company.” But people who are miserable, especially those who are in physical pain, often retreat into their shells like a wounded animal. I think Solomon had this in mind in Ecclesiastes 12:1, when he said, “Remember also your Creator in the days of your youth, before the evil days come and the years draw near when you will say, ‘I have no delight in them.’” What are the “evil days”? He was talking about the physical breakdowns that come with aging. When your body is ill or infirm, you may feel like isolating yourself.

• Moses suffered from the loneliness of leadership. As he listened to the Israelites murmuring and complaining, he cried out to God in Numbers 11:14, “I alone am not able to carry all this people, because it is too burdensome for me.” Moses felt alone even though he was surrounded by millions of people.

• Jeremiah experienced the loneliness that comes from standing for God. This weeping prophet told the inhabitants of Judah that Babylon was going to overtake them because of their godlessness. How did the people respond? They threw Jeremiah in a cistern. If you take a stand for God in your school, your workplace, or your neighborhood, don’t expect everybody to applaud you. You’ll experience isolation for trying to live a godly life.

• Jesus Himself felt the loneliness of being betrayed by His closest followers. Even His own family turned their backs on Him. But most painful of all, Jesus felt abandoned by God. As He hung on the cross, Jesus cried out, “My God, My God, why have You forsaken Me?” (Matthew 27:46). That’s the ultimate loneliness.

• Paul felt the loneliness of abandonment and isolation. When he was in prison awaiting his trial and his ultimate beheading, Paul wrote to his protégé, Timothy, “Make every effort to come to me soon” (2 Timothy 4:9). Then Paul gave Timothy an honest assessment of what had happened to him. He said in verse 16, “At my first defense no one supported me, but all deserted me.” Paul wasn’t having a pity party; he was being honest with Timothy, a young pastor. He was saying, “Be careful. The people I trusted in left me.”

Loneliness is natural, but it doesn’t have to be lethal. There is a way out of the shadow of loneliness, what I call the ABCs of moving from loneliness to companionship.

A: Acknowledge Your Feelings of Loneliness

Don’t try to slap on a superficial smile or engage in pious platitudes when they don’t fit. Be honest with yourself and with God about your feelings of loneliness. David was. He cried out in Psalm 142:4, “There is no one who regards me . . . no one cares for my soul.”

B: Be Proactive in Conquering Loneliness

Make the moves you need to conquer loneliness. What is the cause of your loneliness? Why aren’t there people around you? It could be a poor self-image. Maybe you’re thinking, I don’t deserve to have friends. But in Ephesians 2:10, Paul said we are God’s “workmanship.” That is the Greek word poiema, from which we get the word poem. Do you realize you are God’s poem? You are the expression of God Himself.

Maybe self-image isn’t the problem but selfishness. You say, “I’m too busy to have friends.” That’s code for “I’m too wrapped up in myself to have friends.” But companionship is not a luxury; it is essential for our spiritual, emotional, and even physical well-being. Maybe it’s time for you to reach out to other people. In Philippians 2:3–4, Paul said, “Do nothing from selfishness or empty conceit, but with humility of mind regard one another as more important than yourselves; do not merely look out for your own personal interests, but also for the interests of others.” Do you want to have friends? Try meeting somebody else’s need, and you’ll have more friends than you know what to do with.

The best place to find friends who will encourage you is the church. In the New Testament, the Hebrew Christians were under persecution, and they were in danger of giving up their faith. The writer of Hebrews said, “Let us hold fast the confession of our hope without wavering” (10:23). How do you keep from wavering? Look at verse 24: “Let us consider how to stimulate one another to love and good deeds, not forsaking our own assembling together, as is the habit of some, but encouraging one another.” The Bible says isolation can easily become a habit, but we need one another in the body of Christ.

C: Cultivate Your Relationship with God

Saint Augustine wrote about God, “You have made us for yourself, and our heart is restless until it rests in you.”1 We need a relationship with God.

David understood that. In Psalm 25:18, after admitting his loneliness to God, he said, “Look upon my affliction and my trouble, and forgive all my sins.” For David, cultivating a relationship with God started with confessing his sin. Maybe you’ve allowed a sin in your life to become a barrier between you and God. Confess that sin.

Twenty-five hundred years after David, there was another man who looked to God’s Word to revive him and his relationship with God. When William Tyndale, the reformer and Bible translator, was imprisoned in Belgium, he wrote to the Marquis of Bergen to ask for warm clothing. Then he said, “But above all, I entreat and beseech your clemency to be urgent with the Procurer that he may kindly permit me to have my Hebrew Bible, Hebrew Grammar, and Hebrew Dictionary, that I may spend my time with that study.”2

For Tyndale, pursuing the Hebrew Old Testament was the same thing as pursuing God. The way we pursue God is through His Word. Like Tyndale, if you are in the shadow of loneliness, remember that the beginning place for conquering loneliness is cultivating your relationship with God.